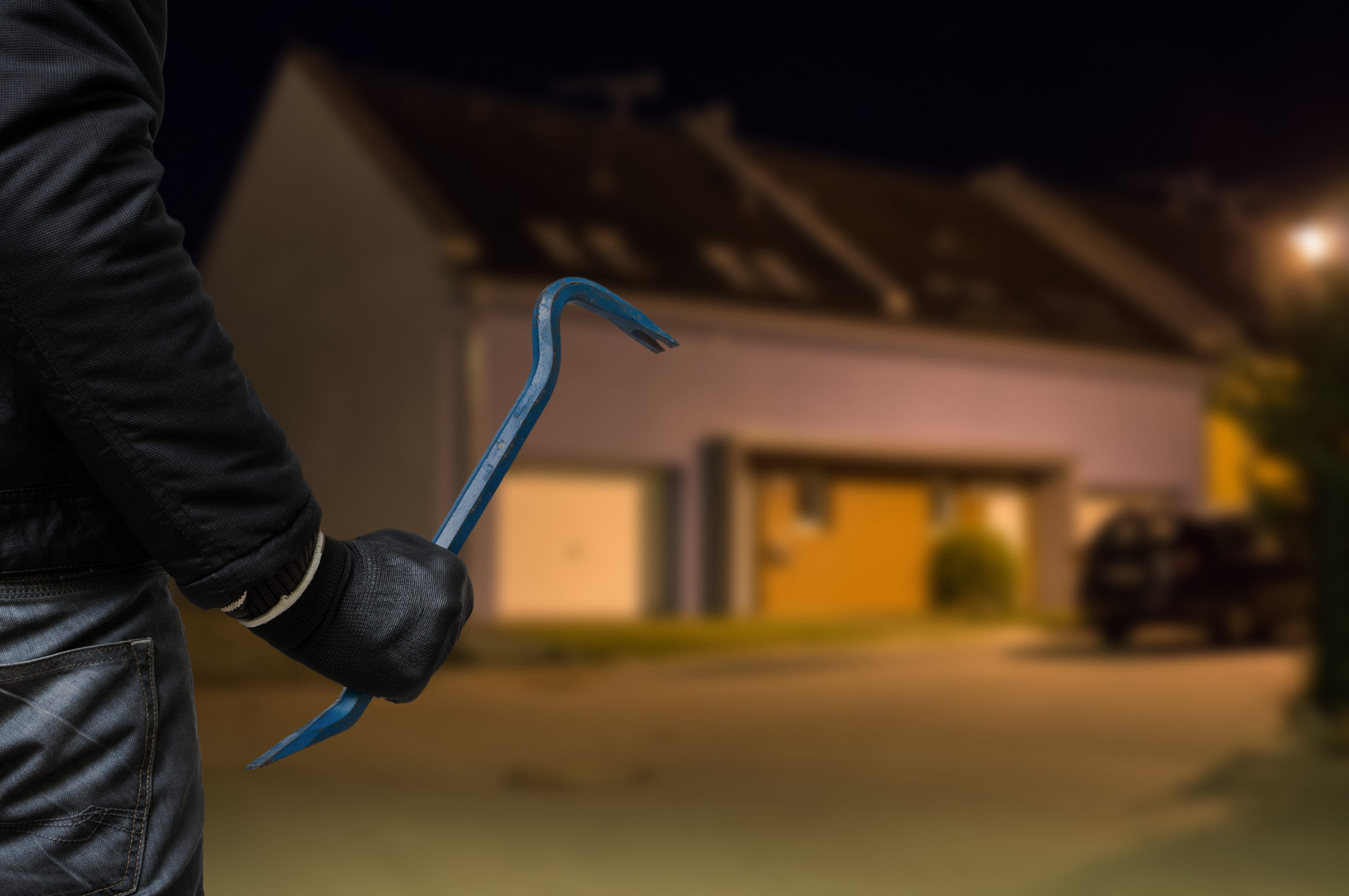 Your home is your castle.  Keeping it secure and your family safe should be a high priority. While many articles focus on how to handle a burglar once they have entered your home, we’ll instead focus on methods to reduce making your home an easy target.

This may seem like common sense but many people forget to do lock doors and windows and provide an easy access point to burglars. According to the FBI, about 30% of burglaries in the US are considered “Unlawful Entry” meaning intruders were able to gain entry without breaking in, usually through an unlocked door. Each night before I go to bed, I go through the routine of checking all the doors and windows to make sure they’re locked.

Regarding locks, use deadbolt locks at a minimum (as opposed to simple push button locks). For another layer of protection, consider using a door security bar. If someone tries to kick down your door, they’ll find this will be a difficult task. The security bar provides your home with an added dose of safety by reinforcing doors from outside intruders.

Sliding glass doors and windows are also vulnerable. Using a wooden dowel or another solid object like the door security bar helps prevent windows and sliding doors from being opened should the lock be compromised. Most windows can be pinned for security. Drill a 3/16″ hole on a slight downward slant through the inside window frame and halfway into the outside frame – place a nail in the hole to secure the window.

And don’t forgot to lock the door going out to the garage. If someone gains entry into your garage, they can easily walk into your house if you didn’t lock that door as well.  I have a neighbor whole recently had their car broken into in front of their house.  They had left the car doors unlocked and when the burglar accessed their car, there was a garage door opener inside their car.  The burglar opened the garage door and was able to steal tools.  Had they wanted to, they could have also broken into the home if my neighbor had not locked his garage door.

Someone looking to enter your home doesn’t want to be seen. I have several different lights on at night outside my house to make my house very visible. It’s easy to forget to turn these on so having lights setup on automatic timers, photosensitive switches or motion detectors is a simple way to ensure your house always has lights on at night.

Here’s a few different options you can use:

3.) Make it appear someone is at home

Contrary to popular belief, most burglaries do not occur at night at all. Instead, 65% of burglaries occur between 6am and 6pm. Most burglars do not want to risk encountering someone so they will try your home when you’re most likely to be at work. The most common hours for a burglary to occur are between 10am-3pm.

Many times a burglar attempting to access your home during the day time will pose as a salesman to find out if anyone is home.  Often would-be home burglars will knock on the door and if no one responds, will either try to gain access via the front door or other points of entry (think your patio door in your backyard).

Here are some considerations based on the time of the day:

4.) Learn to rely on neighbors to watch your house

Having an extra set of eyes to watch your house is invaluable. I have a friend that lives outside of Salt Lake City, Utah that I used to visit from time-to-time. In his neighborhood, the children ran around without any parents nearby. I was surprised to see this coming from an area where it’s rare to see a child outside without adult supervision. When I asked him about this, he brought up the point that the neighbors all look out for each other. There was a real sense of community there and people genuinely cared and watched out for their neighbor.

5.) Removing shrubbery from around your house

Trim trees and shrubs so they can not be used as hiding places for intruders.  If you have shrubs that provide cover for a would-be intruder, they can use this to take their time to break into a window.  Also consider putting plants around the house that have thorns.  Anything you can do to make it difficult for them to get close to your home will make it that much more challenging.

You don’t necessarily need a large attack dog, but rather a small barking dog will do just as fine. If the animal makes noises and barks, someone make think twice about attempting to break into your home. They will not know if you are now alert that something is wrong or if the dog is big enough to attack them. Point in case. Watch this video where a potential home burglar is scared off by a small yorkie dog. While it’s a funny video, the reality is that when someone is trying to break into your home, they’re probably already nervous and a dog like this can do the trick to scare them away.

Don’t have a budget for a home security system?  Here’s some alternatives:

Again, our goal here is to avoid giving someone cause to break into your home.   Flaunting your wealth sends a signal that you have things they’ll want.  Simple things you can do:

9.) What to do if you are gone for an extended time away from your home

If you’re going to be gone for an extended period of time, here’s some simple things you can do to not draw attention to burglars checking out your neighborhood:

10.) Considerations if your car is outside your house

As I mentioned above, I had a neighbor recently that had their cars broken into (well, they left the car doors unlocked) and the burglar was able to access their garage.  If you park your car in front of your house, here’s some things you need to think about:

With these simple (and inexpensive steps), you can severely reduce the probability that your home will be a target for home invasion.