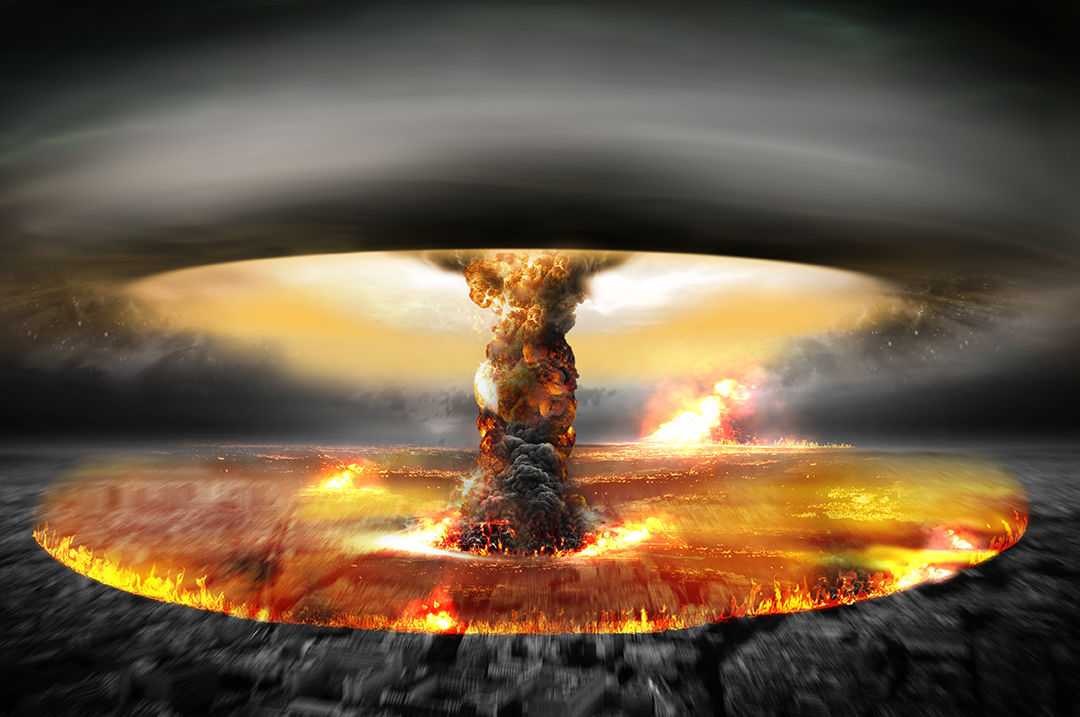 5 things you need to know about an EMP

The threat of an EMP event or Electromagnetic Pulse attack has been brought before Congress as a very real threat to the United States electrical infrastructure. EMP’s have been referenced in movies like Ocean’s 11, the Matrix 2 and Broken Arrow. In addition, fictional books like Going Home and 1 Second After use the concept of an EMP attack as the catalyst to create the collapse of society as we know it. In this article, we’ll discuss 5 things you need to know about EMP’s and we’ll focus on separating fact from fiction.

The knowledge about EMP’s has been around for quite some time. In recent years, it was brought up by both Rick Santorum and Ben Carson in the January 2016 GOP debate as a potential scenario that could happen to the U.S. should such rogue nations such as North Korea or Iran gets nuclear capabilities.

In this article, we’ll discuss these 5 things you should know about an EMP event:

What is an EMP?

Wikipedia defines it like this: An electromagnetic pulse (EMP), also sometimes called a transient electromagnetic disturbance, is a short burst of electromagnetic energy. Such a pulse’s origination may be a natural occurrence or man-made and can occur as a radiated, electric or magnetic field or a conducted electrical current, depending on the source. EMP interference is generally disruptive or damaging to electronic equipment, and at higher energy levels a powerful EMP event such as a lightning strike can damage physical objects such as buildings and aircraft structures.

OK, so what does that matter to you?

The key concern with EMP’s is the effect it has on electronics and our electrical grid. The electrical grid in the United States is not capable of handling a large-scale EMP or Coronal Mass Ejection, or CME which I’ll talk more about in just a moment. It would take time to recover from such an event as electronic equipment used to control generating units would have to be replaced. Such spare parts are not normally carried in volume in a power plant for wholesale circuit board replacement. In the case of the electrical transformers for a power grid, the length and intensity of the EMP or CME would be the overriding concern as to whether critical damage to the equipment occurred. The grid is hardened for lightning strikes, but not for a large CME or EMP’s. There’s been CME’s in the last 20 years and Canada normally bears the brunt of the problem due to their proximity to the northern pole.

The concern with an EMP is that if one were used over a city or region, it would possibly destroy all electronics which are not hardened. The word possibly is used as so many factors must come together for an EMP to be a real threat. The distance of travel for an EMP is normally line of sight, however, due to the effects on a power grid, it can travel through a grid to the furthest point of the grid, which could be many miles from the event itself. The effects of an EMP were actually experienced on the island of Oahu in Hawaii, shortly after 11 p.m. on July 9, 1962. It was at this time that a thermonuclear weapon was tested over the Johnston Atoll and the subsequent EMP destroyed around 300 street lights in Oahu.

Another natural phenomenon similar to an EMP is a CME or Coronal Mass Ejection. A CME is a giant cloud of solar plasma (think of a tremendous surge of several terawatts or even potentially more) with its associated magnetic field that has been blown away from the Sun during strong, long-duration solar flares and filament eruptions. In this article, we’ll focus on EMP’s but many of the effects of a CME could have the same impact as an EMP.

So who has this EMP technology?

Well, technically the countries that possess nuclear weapons have this capability. There are eight sovereign states that have successfully detonated nuclear weapons. Five are considered to be “nuclear-weapon states” or NWS under the terms of the Treaty on the Non-Proliferation of Nuclear Weapons, or NPT. In order of acquisition of nuclear weapons, these are the United States, the Russian Federation, the United Kingdom, France, and China. Since the NPT entered into force in 1970, three states that were not parties to the Treaty have conducted nuclear tests: India, Pakistan, and North Korea. Israel is also widely presumed to have nuclear weapons, though it maintains a policy of deliberate ambiguity regarding this, and is has not been proven definitively to have conducted a nuclear test nor has any acknowledgment been made by Israel of such an occurrence.

While there are additional options to deliver an EMP without nuclear weapons, their capabilities are minimal.

What would happen if an EMP weapon were used against the U.S.?

As a nation, we have experienced technological leaps and bounds over the last few decades and our infrastructure has become more and more reliant on these technologies. Farms can now produce crops at 40x the yield that they could just 100 years ago due to the advancements in equipment (both mechanical and electronic derived), pesticides and fertilizers. Our power production facilities have become very dependent on computers to run many of the systems as well and are dependent on these modern technologies as we’ve moved away from the old analog systems. If the electrical infrastructure were to be crippled or completely destroyed, the results would be devastating. Everything you take for granted on a daily basis: food delivery, trucking, sewage, internet, cell phones are all dependent on these systems working. At the moment, very little has been done to harden these systems against any manmade type of EMP or CME. For nations wishing to inflict a large scale impact on our nation, an EMP weapon would have a profound impact on our nation. While the military has taken steps to harden their equipment against such an event, very little has been done in the civilian population to ensure the equipment that runs the critical infrastructure is protected. If our entire infrastructure were compromised, the systems in place to keep us alive would fail and the recovery could take a significant amount of time, potentially years.

What would a successful EMP attack look like? I would recommend you read The EMP Commission. In the report, it provides a very detailed breakdown of an EMP, its impact to our infrastructure and what the country needs to do to prepare against this threat. It’s a good read, even if you just want to skim through it.

How far would an EMP strike set us back? Depending on which report you read, the expectation is that 90% of the U.S. population would die within the first 12 to 24 months if the entire grid were to go down. That’s something to strongly consider.

How probable is an EMP?

OK, so we’ve discussed a lot of the doom and gloom of EMP’s, so let’s discuss the probability we’ll see an EMP strike on our nation’s soil.

In May of 2015, Peter Pry warned congress that this type of attack on American soil would kill approximately 9 out of 10 people through starvation, disease and societal collapse. In his scenario, an EMP resulting from a high-altitude nuclear detonation, while possible is not very probable. If someone bent on hurting us were to pull this off, they would need a ballistic missile and nuclear weapons. The missile would need to be an Intercontinental ballistic missile that was launched from their soil or they’d need to have a platform that was within range of the U.S., similar to the threat during the Cuban Missile Crisis.

The probability that a rogue nation or terrorist group could develop the technology in order to pull this is off is nearly impossible. Why is this? There are 3 primary things that have to be considered:

In one of my favorite fiction novels regarding EMP’s, a book named 1 Second After, the storyline describes nuclear missiles being launched from container ships around the U.S. Again, as we described above, the probability that a terrorist group or rogue nation could amass this technology to build a rocket capable of delivering in the exact spot with hundreds of megatons is highly improbable.

If I were a betting man, I’d put my money on Cyber attacks crippling the U.S. electrical grid. We’re already seeing this happen around various power plants around the U.S. Utilities which have had “cyber incidents” like ransomware attacks according to the National Rural Electric Cooperative Association. These types of incidents are increasing in frequency and could be a greater issue in the future.

What can be done to prepare for an EMP event?

Well, first the grid could be hardened to withstand EMP’s. Conservative numbers to harden the grid could be as little as 3 percent more than existing capital investment for electric grid upgrades which would translate to about 1 to 3 billion per year. There have been many complaints nationwide on how dilapidated our nation’s infrastructure has become and considering how much money we invest in frivolous programs already, in my opinion, this would be money well spent.

You could also build a Faraday cage to house the equipment in. A Faraday cage or Faraday shield is an enclosure used to block electric fields. It is formed by a conductive material or by a mesh of such materials. A Faraday cage operates on the premise of making the external electrical field which causes the electric charges within the cage’s conducting material to be distributed such that they cancel the field’s effect in the cage’s interior. Faraday cages can be made to protect your personal electronics are not that difficult to make. While getting into the specifics of building one of these is beyond the scope of this article, you can easily research online by simply Googling “how to build a faraday cage” and I plan on creating an article specifically for this in the not so distant future.

Hopefully, this article gives you a high-level view of EMP’s. The threat of an EMP has been brought up recently within politics and while the possibility of an EMP strike against our country is possible, it’s not that probable.

NK and Iran have nuclear equipped satellites now. Both Russia and the US have admitted to having weaponized EMP’s that require no ballistic missiles.

Thank you for the updates. I started prepping in 2019 after learning what it meant. I like your site and your mission to spread the word for survivalists. I tell people I know and hope they take me serious but if they don’t it will be too little too late. I have a section on my foodidiva website and my fb group Preppers I created just for this purpose and working to let people know about getting ready for whatever so hopefully people wise up and dig into the reality check they cannot see before their eyes, blinded by so… Read more »