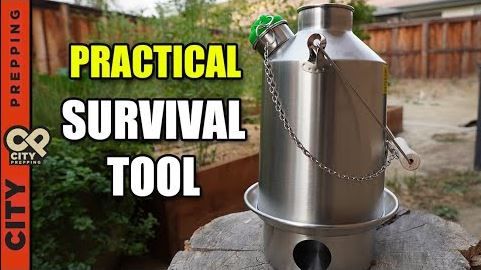 In this blog, we’ll take a look at the Kelly Kettle Rocket Stove.  We recently did a blog on our website regarding rocket stoves.  This particular setup is different and has some unique features we’ll go over in this blog.

We’ll break this blog up into 3 parts:

So let’s jump in!

Part 1: The 4 Advantages of Rocket Stoves

In this part of the blog, we’ll take a look at the features that make Kelly Kettles so unique.

Some of the items in our emergency preparedness inventory are very specific for emergencies, but items like these are great for camping as well, so they kind of serve 2 functions.  We just like the idea of having something that is portable, efficient, and requires very preparation to use, in this case just grab some twigs and dry leaves off the ground and you quickly have the ability to heat up water and cook food.  When we go camping, we typically take freeze dried meals because we don’t like to deal with the preparation and clean up so having the ability to quickly and easily boil water comes in handy.