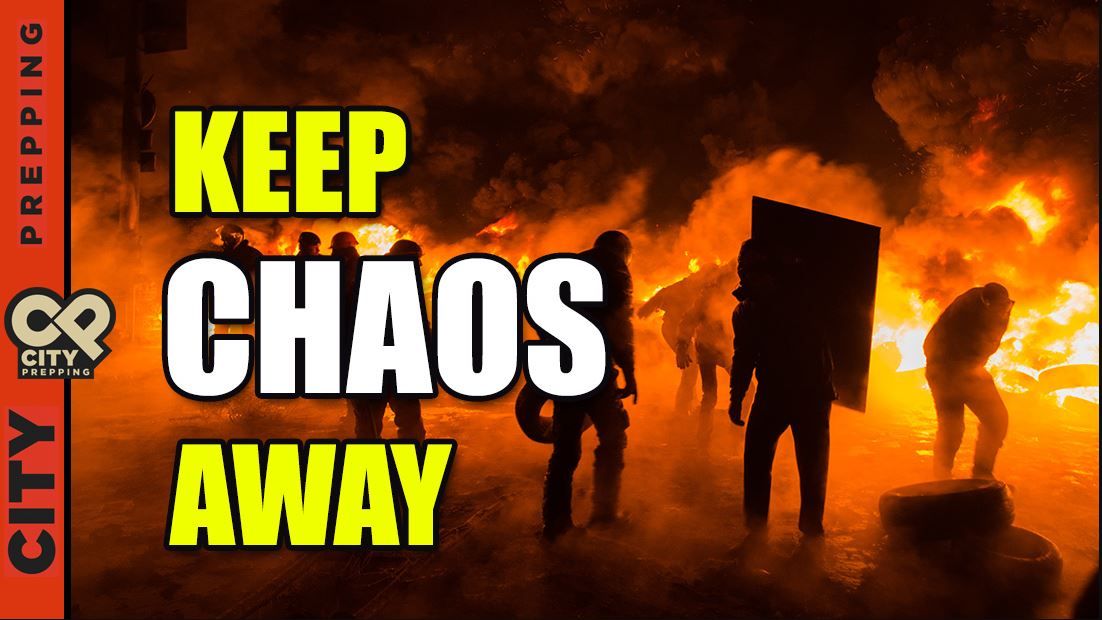 How to Keep Riots Out of Your Neighborhood

In twenty-twenty we have seen riots and looting in the streets.  We have seen armed forces moving through city streets and suburbs.  We have seen even the quietest of gated communities filled with mobs of people.  Violence in city streets can easily escalate and be pushed out or boil over into residential or even suburban areas.  We think it is safe to say that your homeowner’s association probably doesn’t have a plan for this possibility, but you and your neighborhood could.  So how do you keep your neighborhood safe from riots when they are near you or heading your way?  In this video we will examine different ways to keep your neighborhood and your home safe when civil unrest is at your doorstep.

The best deterrent of unwanted invaders are lights, cameras, and the possibility of action on your part.  First lights.  Obviously, lights are only an effective deterrent from dusk to dawn, but this is a critical time when you and your property are somewhat vulnerable.  A well lit perimeter is not as inviting to a rioter or burglar as a dark or heavily shadowed property.  If you live in a suburban tract, lights also help your neighbors and community respond when you cannot.  Solar motion lights have gone up in lumens and down in price and energy consumption.  Because they are self-contained, they continue functioning when the power goes out, and they can be installed and made operational with very little effort and no need to hardwire into your electrical system.  Assess the perimeter of your home and make sure exterior walls, windows, and gates are well lit.

Motion cameras, doorbell cameras, CCTV, security mirrors, even fake round plastic domes are another form of deterrent.  When someone knows they are doing wrong it is inherent in their thinking to avoid being caught on video or seen.  Nobody trying to break into a house, light a fire, or even throw a rock really wants that video admitted as evidence later on in their court case.  They don’t want the police using a screen capture to identify them later.  There are several low cost motion activated cameras available from multiple providers that can allow you to monitor several streams around your whole house, post captured videos to networked neighborhood groups, or even have your videos monitored by a twenty-four hour service.

We have to stress here that lights and cameras are not going to stop all rioters emboldened by the opportunity to be lawless.  They are not a guarantee.  What they are is a deterrent.  A well illuminated and monitored home, or one that appears so, gives the impression that there is a vigilant homeowner inside that is ready to defend his property and life if need be.  Rioters are likely to move to softer targets.  If the majority of your community is well lit and appears to be visually monitored, rioters are likely to favor softer targets or retail verse residential areas where they will be able to loot to a greater degree.

You will also need to prepare your home for the possibility of rioters and looters moving through your streets.  Cars should be parked in garages or parked somewhere safer.  Flower pots, statuary, rocks, or anything else which can easily be picked up and thrown should be brought in or moved inside fenced locations.  Trash cans should not be left on the curb, because starting fires in trash cans and moving them against or inside buildings is a common action for rioters.

Window shades, curtains, or blinds should be drawn and closed to keep concealed any valuables you may have inside.  To really stay ahead of the possibility of rioters consider applying a clear security film to windows.  This affordable option will keep your windows from shattering when hit with a projectile or blunt force object.  Even without rioters ever appearing in your neighborhood, window security films are great to add a barrier between you and any would be intruder.  As a deterrent, they will slow down intruders and they place one more hurdle they will really have to work at to gain access to your home over other homes.  If you are a shop or business owner in an area that may see violence, I cannot recommend clear security films enough to you.  It will make looting your shop far less desirable.  If you haven’t prepared in advance, making X patterns on your windows with duct tape will keep them from shattering completely and can be used as a quick last resort.  Finally, you may consider having sheets of plywood that can quickly be mounted just as you would to protect against a hurricane.  The downside of this is the space they require to store and the fact that they limit your ability to see and respond to an exterior threat.  An open and shattered window in a riot situation should be considered the same as an open door.

To completely prepare your grounds and just as a general security measure we recommend in many of my videos, reinforce your doors.  Both the strike plate and the frame can affordably be reinforced to require thousands more pounds of pressure than a karate kick or shoulder can produce.

The rioter has two main destructive tools at his disposal: rocks and fire.  Unfortunately, you can’t go throughout your neighborhood removing all the fist sized landscaping rocks, and that is another reason to consider security films for your windows.  More destructive than rocks, however, is the threat of fire.  Again, bring in any trash cans and remove any clear ignition sources around your property.  Dead bushes you haven’t gotten to clearing out should be cleared immediately.

Bring in any propane tanks from exterior grills, heating units, or fire pits.  Apply the same thirty foot rule applied to homeowners under threat of wildfires.  Look at your perimeter for thirty feet out and look for anything combustible, from lawn flags to dry trees to piles of fall leaves to old tires.  If you know rioters and looters are in your neighborhood or near your neighborhood, make sure you hose down any wooden shingles on your roof, wooden fences, and turn your sprinklers on and let them run.  Even a wet and slippery lawn is a form of deterrence.  The wetter the better.  Even lightly spraying off your exterior walls can be enough to keep any incendiary device from spreading further.

Have a fire extinguisher on hand, as you should for standard home safety.  Remove the tool of fire from rioters and looters and keep your property safe.

Know Your Neighborhood and Neighbors

Have an Escape Plan and Bag

Your neighborhood and your home is obviously your last and final stand.  Between your own efforts and your neighborhood’s efforts, it should be enough.  There is always the possibility, however, as we have seen in instances of fire, where you absolutely have to flee your safe home or apartment for safer locations.  Making a final stand in a building burning around you is not going to be successful.

To ensure your safety, always have an escape plan and a bug out bag.  Make sure your bag has any necessary medicines, as well.  If you live in an urban or a suburban environment the likelihood you may have to leave your premises is higher.  Know your escape routes.  Favor escape routes that move away from populous areas, avoid crowds, and circumvent conflict zones.

Leaving the safety of your home is always the final and last resort, and should only be done when all possibilities of staying have been eliminated.  You may be able to fall back on other neighbors

Leverage technology to maintain security and awareness.  Using apps like Twitter, Facebook, MyCoop, Neighborland, Nextdoor, Life360, Ring, or WhatsApp can help you network your neighborhood and allows people to report problems, threats, or suspicious activities easily.  Sometimes public and HOA locations have webcams that you can monitor to track movements of people in your community who shouldn’t be there.  Even forming a community text string or applications like Slack can provide a networked group of active eyes and can provide instant message alerts to activities in your area.

Do you have a drone collecting dust in your garage?  Why not deploy it to surveill your neighborhood?  You can track movements and alert others in your community while also creating a video record with even a low end drone.

You can use the bird’s eye satellite view in Google Maps to make neighborhood watch patrol assignment maps or assess possible weak points or entry points into your neighborhood.  Armed with this information you can determine which areas of your neighborhood might need more protection or surveillance.  If you are preparing well in advance, you can lobby your homeowners association or neighborhood watch group for the installation of open IP cameras in high traffic and public areas.  This will allow anyone with the right access and passwords to login and observe points throughout the neighborhood.  Outdoor, weatherproof cameras have become very affordable in recent years.  These cameras can be easily installed outside public areas or willing neighborhood houses and aimed at neighborhood entrances and exits. Access to the cameras can be restricted to just people within your neighborhood to prevent unauthorized viewing. The streams can be viewed through most web browsers without the need for any specialized software.

Walkie talkies or CBs shared with key neighbors can keep you in communication with one another even if cell service goes out.  In short, leverage technology to integrate networks of eyes and ears on your community.  Use technology to help you create twenty-four seven security.

The more in advance you prepare the better your preparations can be.  Perhaps, your neighborhood will never be infiltrated by mobs seeking to cause destruction and rob you, but measures you take now to protect yourself against that possibility will also have the added benefit of protecting you from everyday crime, even some natural disasters.  Observing the thirty foot perimeter for fires protects you better from wildfires.  Strengthening your doors and reviewing your lighting helps to protect you from other crimes.  Networking your neighborhood groups in-person and electronically makes your neighborhood less attractive for bad guys and gives you early notifications about bad situations brewing in your community.  They allow for many eyes and ears on your neighborhood and allow you to outnumber the mob that may be in your neighborhood.

Rocks, fire, numbers, and anonymity are the weapons of the rioter.  When you reduce the threats of rocks and fire, when you surveill and watch them to remove their anonymity, and when you display a unified neighborhood vigilance, you make your neighborhood and your home less attractive to looters.  They will opt for less vigilant, less protected neighborhoods, even if the looting score is less.