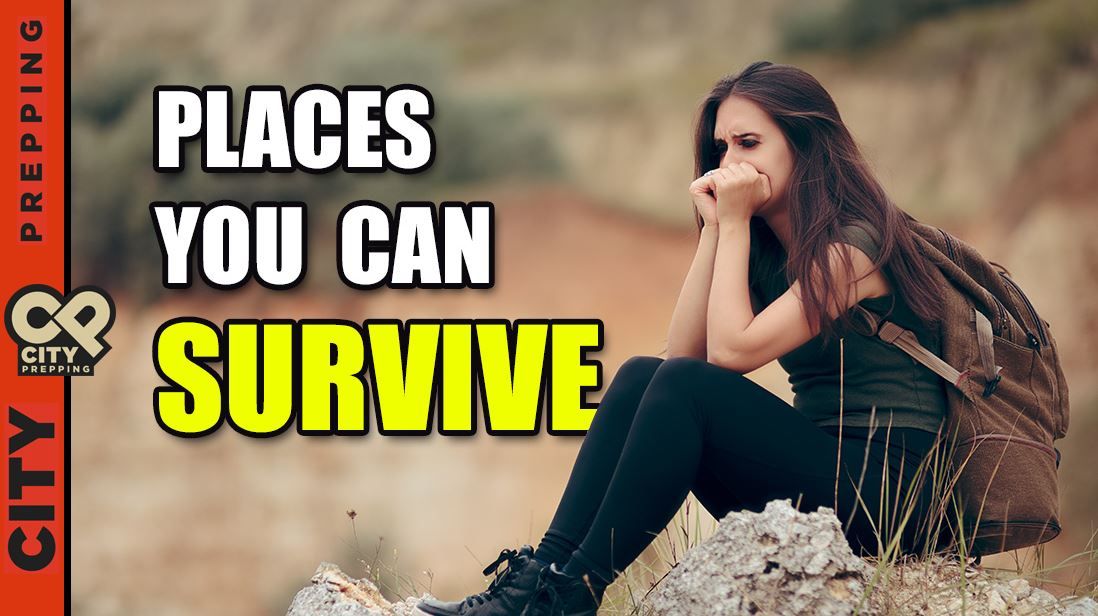 6 Bugout Locations When You Can’t Afford One

One of the common questions when we discuss evacuating to a bug out location is how can anyone afford this option?  When making rent is hard enough, owning a bug out location with a nice cabin and food stores is a fantasy.  After all, the landlord or deputies aren’t likely to come and try to evict you for late rent during the active aftermath of a horrible disaster.  The reality is that most people may not ever be able to afford a bug out location of their own, but they still may need to bug out in an emergency when their survival depends on it.  In this video, we will look at several considerations you will have to make when planning to bug out after a disaster and places you can go where you can survive if you know what the new location’s dangers are. 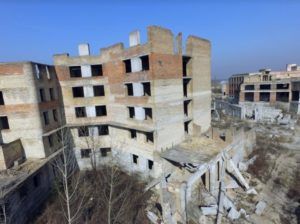 The first consideration when thinking about bugging out is the type of disaster you are in and its severity and reach.  If you are forced to evacuate from a natural disaster like a hurricane, fires, or flooding, you may only need to bug out temporarily in a nearby region until the threat has passed.  These localized events allow you to simply bug out to a hotel in a nearby area. Often, disaster funds are available from the government or your insurance company that would allow you to stay for an extended period in a hotel.  If hotels are not an option, there are typically temporary shelters to accommodate these localized disasters.

However, a disaster on a national or global level would not allow you to simply move temporarily to a nearby region.  Disasters of this larger type require you to assess where you are starting from and where you can find the resources you need to sustain yourself.  The environment you are in at the time disaster strikes may not contain the resources you need for long term survival.  Your long term survival may require you to travel to a safer area.  If this isn’t feasible, you may have to bug out of your location but remain in the area somewhere.

Any bug out location will have to have these same basic requirements: food, water, and shelter.  When it comes to food, you will need to consider if you can harvest and forage from nature or grow small quantities of food to sustain you.  When it comes to water, you ideally want a replenishable natural supply that may require boiling to drink but is plentiful.  Regarding shelter, you will need to think of the tent or tarp or lean-to structure you might build and whether you can defend that location if others try to rob you of your resources.  Do you have a nice tent but no way to protect it?  Likely in an SHTF situation, you will not have that tent for long.  Will you need a structure, or do you already know of one you can occupy with relative safety?

You will have to consider how you will get to the location.  If you have a vehicle, your engine noise will let people know you are traveling through, making you a target.  If you are on foot, you can keep a lower profile, even traveling by night if that is the safest means, but you will expend thousands of calories, and progress will be slow.  There are many coves and bends around many lakes and rivers and coastal regions almost entirely inaccessible by land if you travel by waterway.  And though sound travels further and clearer across waterways, large bodies of water provide a natural barrier between you and would-be thieves.

When it comes to traveling, realize that fires, the discharge of firearms for hunting and defense, and vehicle noise all tip off residents that you are moving through their land or on their ground.  Wherever your final destination is, and all along the way, you will have to consider who owns the land, thinks they own the land, asserts their power over the land, or who may be passing through like you.  Conflicts could arise from any interactions with these people.  When laws cannot be enforced, you may have to pay a toll to pass through some areas safely, or it could cost you everything of value you have.

Once you have considered all that, you can turn to the locations.  Here are the best bug-out places when you can’t afford a bug-out location, but you have to head out. 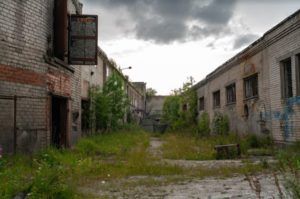 From abandoned buildings in or near your town to old worksites, mining sites, drilling sites, and logging sites, there are many places far off the beaten path where you can provide yourself the basics of shelter.  One caveat to this is that there are probably many others who also know about it if you know about it.  If you’re planning on hiding out beside the old abandoned quarry, there’s a good chance a dozen or more people given the same options to survive are also planning on doing that.  If you plan to take the old forest roads up to a long-ago abandoned forest ranger shelter, you might find it to be safer.  If you plan to bug out to an old barn, it may still be on someone else’s land.

In an abandoned building scenario, you have to consider whether you can defend the structure.  You will either be practicing OPSEC by keeping fires low and smokeless and keeping silent, or you are going to be part of a small group that can look out for one another.

3- Off the Road or Under It 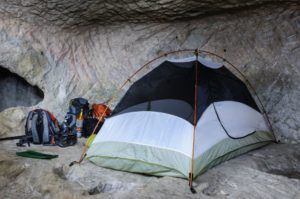 After a disaster where thousands or millions of people are bugging out, traveling on large highways may allow you to travel in groups.  Smaller roads and county roads may allow you to dip off into wooded areas, down creek beds, or even under bridges.  Roads that are even slightly maintained mean that someone either lives in the area, travels through the area, or works in the area.  Many long gravel roads are really driveways for some people, as residents may live miles apart from each other in some areas.

Traveling under bridges will allow you to access brooks, creeks, streams, and river banks.  When you are ever directly under a bridge, realize that people may still be traveling on the bridge above you.  Many abandoned bridges may provide a safer long-term environment.  Going under a bridge can take you to the banks and animal trails you can traverse to reach more secluded areas, free from others’ prying eyes and sometimes inaccessible but by the same path you traveled. 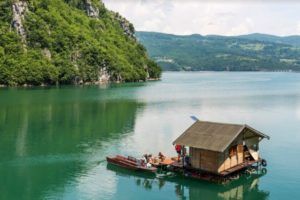 If road travel isn’t feasible, traveling along the rivers’ banks, nature’s natural roads can be a safe means to travel.  Game trails routinely run along and to and from waterways, and there are many regular sinuous curves, bends, loops, and turns that roads don’t follow.  The river banks, rock structures exposed by waterways, caves, and small islands around and in rivers provide potential secluded and safe bug-out locations.  Rivers also offer running water and potential food sources.

Your primary consideration when bugging out up or down rivers is that they are natural ways of travel.  People may be floating through to get to other locations as well.  It is doubtful that they will be traveling against the current without you knowing, as they would require an engine.  If they are traveling down the river, they would be coming from a particular direction and floating silently down the river.  If you found the spot because it had a nice bank where you could put in, or you walked in, and there’s a nice beach or inlet where others could come ashore, make efforts to conceal it with brush or debris that blends in with the rest of the banks.  Covering your trails and hiding your shores will provide you a little extra security. 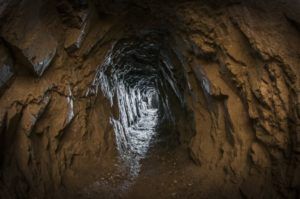 We know of around 17,000 caves in the United States.  If you’ve ever been far off the typically traveled paths, you may have found a cave that is still undocumented.  They do exist.  Add to that the many deep nooks and rock structures that aren’t indeed caves, and you have hundreds of thousands more natural rock structures that could provide you long term shelter.  Add to that the over 500,000 abandoned rock mines in the United States, and there are plenty of potential bug-out locations.  However, the better known the site, the more likely someone has already considered it or some local has already set up camp there.

You have an added layer of safety concerns with any mine or cave that range from falling rocks to gasses to wild animals.  Still, it worked for early man for thousands of years, so it makes the list here for bug-out locations when you can’t afford or get to anywhere else. 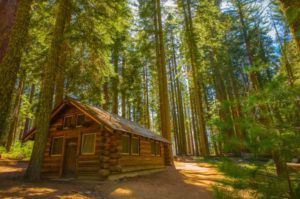 We think this is the favorite fantasy of many a prepper.  Many claim they will just go off into the woods and live off the land when the world turns south.  W call it a fantasy because it is incredibly difficult to survive in the wild.  If you want a taste of it, go for a week or more camping trip but leave the s’mores and hot dogs at home.  You will find that living–just surviving–is more challenging than you imagined.  The basics of food, water, and shelter have to be established relatively quickly if you are going to have a chance.

You will have the added security of isolation since most won’t be able to get to you in the deep woods or forest, but genuinely being off-grid and ultimately providing the food you need from hunting and foraging is a considerable challenge.  Many find it easier to do with experience and practice, but you will likely just find yourself in the border regions of wooded areas if you’re new to it. 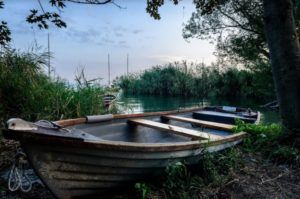 If the land is too hostile, you may find refuge in the water.  You can, technically, live on a raft, boat, or houseboat.  Some inlets and coves provide significant protection from the hostile world.  Living in Southern California, I know several people who plan on just loading up their sailboat and setting out to sea in an SHTF situation.  The challenges of food and water still exist, but taking to the water can provide you with a temporary bug out location until things get better or a more permanent location can be found.

Yes, pirates would probably be a thing after an SHTF situation, so being prepared to defend yourself is necessary.  Even with that problem, navigating waterways allows you to travel by floating five to seven miles per day.  That gives you an excellent opportunity to find the hidden spot, perhaps up an unused tributary, to set up a long-term camp and wait for safer times.  If things turn ugly where you are at, you can always travel another five to seven miles the next day to find someplace safer.

Bugging out is never a great option, but sometimes we are out of options.  Your survival is the most important thing.  When choosing a bug out location, give credence to the considerations and locations discussed in this blog.  We would love to hear what some of your bug-out locations will be.