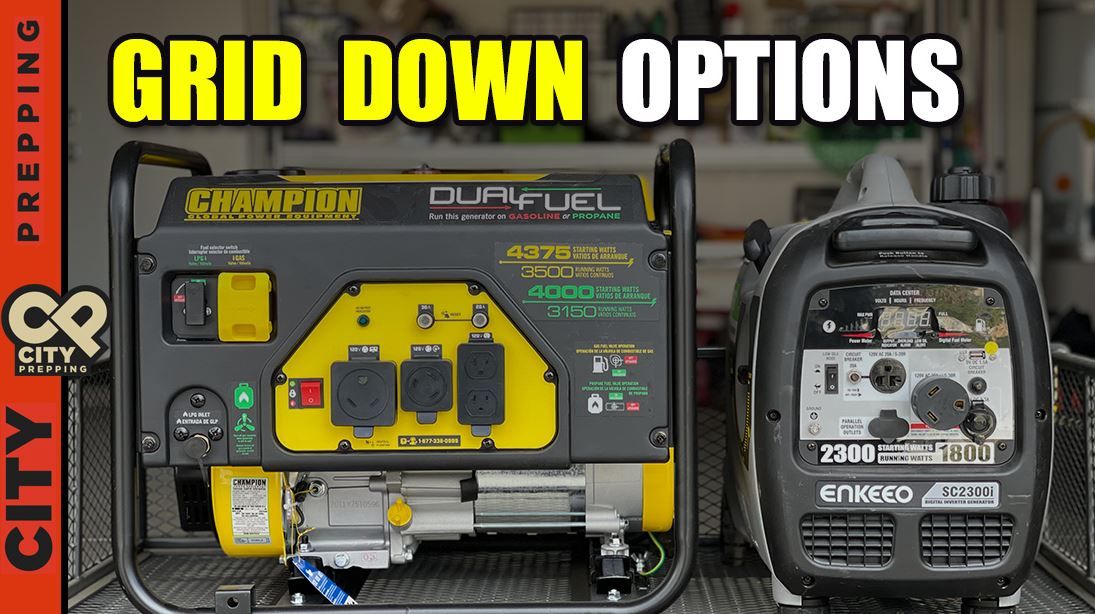 Best generator for grid down

In this blog, we’ll cover the various points you’ll need to consider before buying a generator.  When you start shopping, you’ll find that there’s a lot of options on the market.  Before making a purchase, there are several variables that you must factor in, ranging from how many watts you’ll need, costs, fuel storage, maintenance, safety, just to name a few.

So let’s jump in.

This is the first thing you must consider.  How many watts will you need?  How many devices will you need to power if your power is cut off?  To determine what size generator you’ll need, there are 2 things you must consider: continuous power, or running watts, and extra peak power.  Continuous power is the wattage required for the operation of your electrical devices.  For example, if you are running a refrigerator, you’re using about 600 watts.  But when that refrigerator shuts off because it has cooled down and then later starts back up, the surge watts to restart it is around 2200 watts.  So when you shop generators, you’ll see two numbers often listed: running and surge watts.  I’ll provide a link to a document that lists out the common household electrical appliances with their running and surge watts.  I would encourage you to create your own spreadsheet with the appliances from the document you feel are necessary to operate if the power grid were to go down and determine their running watts and surge watts.  Once you add those up in a spreadsheet in 2 different columns, you’ll know the size generator you’ll need.

When it comes to generators, there’s a handful of options that we’ll define by their fuel source.  The primaries are gas, diesel, propane, dual-fuel generators, which operate on both propane and gas, and then solar generators, a term I’ll use to define portable batteries with charge controllers and inverters that can be connected to solar panels.  I personally decided to purchase a few different generators.  The first is a generator that runs on both propane and gasoline.  By having a dual fuel generator, you have more options based on which fuel is available, plus propane is easier to store, something we’ll discuss in a moment.  I also added a smaller gas generator to my inventory to give me portability.  If I need to move this around or pack it into my car and go in an emergency, I’ve got this option.  I finally added solar generators to my inventory in the event a power grid failure lasted longer than a week or two, and fuel becomes difficult to obtain.  Although these can’t power as much as a larger generator and will need sunlight to charge, they give me the ability to continue to power smaller critical electrical devices.  For those that need to keep medicine cold, these are a great option as you have the security that you can continue keeping your meds cool in a refrigerator by charging this with solar.

When discussing the power source as we did in the previous point, it’s worth discussing the storage factors you need to consider.  Let’s start with diesel.  Under ideal conditions, it can be stored between six and twelve months. To extend the fuel life past twelve months, it needs to be treated with stabilizers and biocide.  Gasoline has a shelf life of about 3 months but can be extended slightly with a fuel stabilizer.  With gasoline, you have to be careful with this as it is very volatile, and proper storage is critical.

Propane is my personal favorite option as a storage option.  It can be stored between 10 to 30 years.  For this reason, I recently purchased a dual-fuel generator to allow me to run on either gasoline or propane giving me options in an emergency situation.  I do try to get my gas generators out and run them once a month to ensure the carb doesn’t plug up.  With solar generators, I check on them once a month to ensure they’re properly charged as leaving them below the manufacturer’s recommended level for a period of time can damage them.

After a major event, getting propane, diesel, or gas will be more challenging as supplies will be limited due to high demand and infrastructure delivery problems.  Solar, with a battery backup system, gives you an infinite fuel source as long as you budget your usage compared to the input.  For example, with a solar option, at night you won’t be charging your batteries so you’ll need to carefully determine how you want to discharge during this time.

OPSEC is short for Operational Security.  This term is used in relation to keeping information you want to keep private from being known by others.  In this case, who do you want to know that you have a generator?

If the grid is down for a prolonged period of time after a disaster, there may be a possibility that others in your area will become increasingly desperate if they’re not able to meet their basic needs.  If you’re operating a propane or gasoline generator, others will know you have prepared and may draw them to your location.   When shopping generators, be sure to research the decibel level.  The higher the decibel level, the noisier the generator will be and the more attention it will attract.  Manufacturers will list this information on their website or on the packaging box.  Typically the cheaper generators are noisier whereas the more expensive generators are normally quiter.  Again, be sure to research this point in advance of making a purchase.  Even if you are able to deal with the noise, the emissions alone will be detectable.

Solar-based generators, on the other hand, will not have these issues and will give you the ability to reduce unwanted attention.  While I don’t anticipate that in a short-term natural disaster that noise from a gasoline-powered generator will be a major issue, a prolonged grid-down scenario will be a different story.

I opted for two different-sized carbon fuel source generators to give me the option to have one that is portable.  The larger of the two will be used to power some of the larger requirements such as a refrigerator while I’ll use the smaller one for other miscellaneous power needs in addition to having the option to be able to pack it into my car if we have to leave.

The same holds true with my solar generator options.  They’re small enough to be highly portable coming in at around 25 pounds.

Keep in mind that gas generators require maintenance.  I tend to operate mine once a month and let them run for about 15 to 20 minutes.  They’re about as noisy as a lawnmower, and I run them in the backyard, so they don’t draw attention.

Regarding the solar generators, they just need periodic charging.  Again, I typically plugin them in about once a month to ensure they’re topped off and I rotate using them through the month to charge laptops and other small devices to ensure they’re working correctly.

Gasoline and propane generators will produce emissions that require them to be at a safe distance from your home to properly operate.  It’s not uncommon after a natural disaster to hear of people dying in their homes due to carbon monoxide poisoning from incorrectly operating their generators.  Most recommend a safe operating distance of about 20 feet from your house.  Also, please do not operate these in your garage.  Be sure to read the manufacturer’s warnings carefully as failing to follow these rules could lead to death.

With solar generators, this is not an issue you need to be concerned about.  Just put your solar panels in a place where they can properly charge and your actual solar generator unit itself can be positioned as close to your house as you want or in your house.  There are no restrictions on these units.

As we covered in this point, your decision as to which option you will purchase will be decided based on the size of your home and the size of your yard.  For example, if you’re in an apartment, obviously, your options are very limited, as running a gasoline generator on your balcony could be dangerous for health purposes.

The traditional carbon-based fuel source generators can vary drastically based on the size and the manufacturer.  Remember, you get what you pay for.  I picked up this Champion dual-fuel generator from Sam’s club for about $400.  I only anticipate using this during emergencies and I try to operate it about once a month for 15 to 20 minutes.  On the other hand, Honda generators are the gold standard for reliability and quality but typically cost a good deal more.  My view is that having a significantly more affordable and not as quality backup gasoline generator that I use sparingly and maintain on a regular basis will be fine in an emergency situation.  But if I anticipated using it more often for camping trips or on a job site, I would probably just go with a Honda generator.

Regarding solar generators, I’ve reviewed several brands over the last few years.  These typically come in at around $1200 or $1400 for the unit itself for roughly a 1200 watt-hour battery system plus another $800 or so for the solar panels.  Clearly, the cost for these is significantly higher but I keep these for potential prolonged grid-down scenarios where obtaining gas or propane may become increasingly difficult.

If you’re new to getting a generator and haven’t owned one before, focus on your power needs as the first and primary factor.  From there, consider the items we listed out.  I own a generator that runs on gasoline, one is a dual-fueled generator, a few solar generators, and I’ll be adding a whole-house battery system to my house shortly that will be connected to solar panels, a video I’ll be releasing probably within the next 4 to 6 weeks.  Again, my view is that the gas and propane generators will be useful for short-term emergencies and my solar-powered option will valuable for long-term grid-down scenarios where the power may not be coming back for a longer period of time.

If you have any thoughts or comments, please feel free to post those below.

We are looking for the spread sheet

Hi thank you very much for educating my husband and I on these Gennies really greatful for your knowledge we learnt quiet a bit today. 😁

I would third that.

Hi! Great post! Do you have the link for the appliance spreadsheet?

I second that. Any link by any chance?