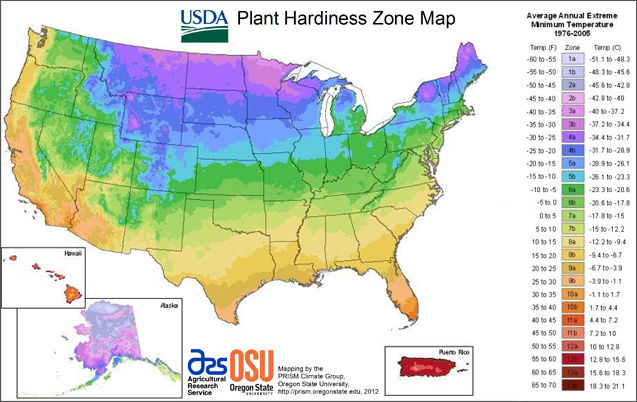 * Here is a planting guide separated into the different zones. Download your Planting Charts | Kellogg Garden Organics™ Murrieta, California is in Zone 9B. This Kellogg site offers a lot of free information.
* Ugh, I’ve got earwigs infesting my garden. Damage from earwigs looks like this: 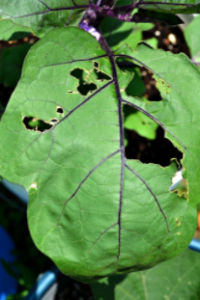 They are in my lettuce mainly, but I’ve seen them on the lawn, and I see chew marks on everything. Unfortunately, Capt. Jack’s Dead Bug Brew does not kill earwigs. Diatomaceous Earth will work, but not when wet, so that means reapplying every time you water, which for me is nearly every day. You can smear Vaseline around the base of the plants. And that would work maybe for my pepper plants which are getting eaten at an alarming rate. But there isn’t really a “stem” for lettuce. So I looked up some organic pesticides and found that Pyrethrin will work. I tried buying it on Amazon. It says they won’t deliver to my zip code. Then I tried ordering in through Walmart, and they canceled the sale and said to try later. I looked at the ingredients for a product called “Eight” by Bonide. I got it at Armstrong. Way back on page 110 of the little booklet that is attached to the container (JK), it says it kills earwigs. I sprayed, but they are STILL eating the leaves. Ugh. Last night I cleared away ALL the mulch, thinking that they are hiding there. It’s an all-out battle, that’s for sure! 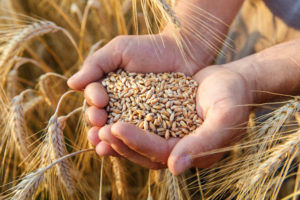 The wheat kernels (wheat berries) can be eaten whole. Just boil 1 c. berries in 2 c. water until wheat is soft. (Just looking at a cookbook now that says 3 c. water to 1 c. wheat). Simmer until the water is absorbed and the grain is softened. Remove from the heat and fluff it with a fork. Recover and allow it to sit for 5-10 minutes.

Presoaking grains for 6-8 hours or overnight is optional, but it can reduce cooking time. You can eat them cold, sprinkled on a salad, or in a casserole. OR you can eat them hot with sugar and milk like cereal.  One time, I put boiling water in a thermos, added the wheat, and let it sit overnight. Then in the morning, I opened the thermos to find cooked wheat. We “tried” eating it and decided that if we HAD to eat it, we could. But when the Rice Krispies are in the cupboard, it wasn’t our first choice.

You can also “crack” the wheat. You can do this in a wheat grinder set on the largest setting. OR, you can put the wheat in a gallon bag and “have it at it” with a hammer. Then just boil like above. My stepfather used to LOVE cracked wheat for breakfast.

What you will most likely WANT to do is grind the wheat. I bought a hand crank wheat grinder, and after about an hour of sweating and cursing, I had ground one whole cup. I bought an electric grinder the next week. PLUS, I told Craig I wanted a free-standing solar panel with all the trimmings so that I would NEVER have to grind wheat by hand again!!!! (Sidenote: We have solar panels, so we can use the wheat grinder, power tools, and the sewing machine. Whatever else we can run off these panels is a bonus.)

Fresh whole wheat is so nutritious and delicious for cooking. BUT, unlike white flour, it doesn’t store as well (only about 6 months). So store the wheat, and worry about how you will grind it later. I figure that those with grinders will be more than willing to let everyone grind wheat.

SHORT TERM FOCUS: Bouillon
I use a lot of bouillon. I have both chicken and beef. I use beef for recipes AND for canning beef. I have many recipes that use chicken bouillon, and you can also use it to flavor rice. 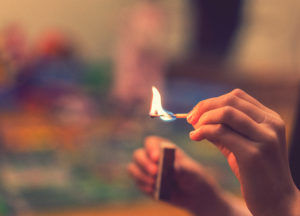 I waterproofed a bunch of matches for my kit. I tied about 10 wooden matches together with dental floss and dipped the whole thing in paraffin wax (it’s in the canning section of the store). I also made many fire starters out of cardboard egg cartons, dryer lint, and paraffin wax. I found that these will burn for about 20 minutes. I LOVE them and have a big stockpile for our outdoor fire pit. The cardboard catches fire easily, and then it burns long enough to catch the wood on the fire. I have flint and steel in the packs, too. But I find the matches work better. Right? That’s why God invented matches!!!!

We have maybe 2 dozen solar lights in our backyard. In an emergency, we can just bring them in when it gets dark outside and use them for inside lighting. Take them back out the next day to “charge.” Craig is really good about taking them apart in the fall, cleaning them, replacing the batteries, and storing them for Spring when we start to use the yard again. It would be worth getting some just for flashlight/candle/matches backup.

The following recipes are taken from Preparedness Principles by Barbara Salsbury

1 3/4 c. whole wheat flour
1 1/2 c. white flour
1/3 c. oil
3/4 tsp salt
1 c. water
Put the water and salt in a blender. Turn to high. Drizzle the oil a little at a time. This will “emulsify” the oil. (who knew?)
Mix the flours and add the oil-water-salt mixture. Knead as little as possible. Make a smooth dough, then roll it as thin as possible on an ungreased cookie sheet (not more than 1/8 inch). Mark with a knife to the size of crackers desired, but don’t cut through. Prick each cracker a few times with a fork. Sprinkle lightly with salt or onion salt as desired. Bake at 350˚ for 30-35 min or until crisp and light brown.

I was reminded of the term “Consistent Overbuying.” As prices rise, we STILL must be preparing. Perhaps now more than ever. Just buy 2 of something that you only need 1 of. Five extra things, five, more if you can. EVERY TIME!!!

Some great tips! Wish we had more Red, Hard wheat put back. It’s hard to find locally in bulk so may have to take a road-trip. Thanks for your time and effort.

The boiled wheat is called frumenty.