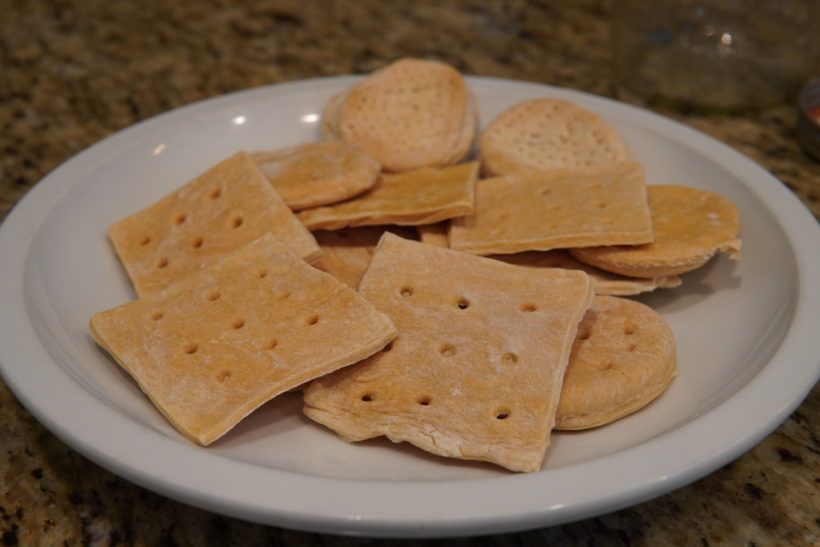 How to Make and Eat Hardtack

Do It Yourself Survival Food

Here’s what you’ll need to get started: 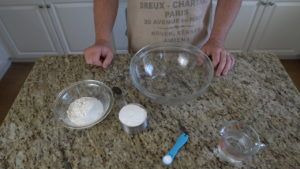 This recipe could not be more straightforward and is excellent for kids. The tricks to good hardtack are a low temperature and long, slow cooking time.  You can even reduce the cooking temperature to 200 and bake/dry it out longer.  To begin with, place 2 cups flour and ½ teaspoon salt into the bowl. Slowly add in ½ to ¾ cup water and mix with your hands. You want the dough to be pliable enough to shape. You don’t want it so dry it is flakey, but you also don’t want it doughy or spongy like bread dough. So, mix it until it isn’t crumbly and it’s not too spongy. If your dough is too sticky, just add a little more flour about 1 heaping tablespoon at a time. You will want to be closer to the ½ cup of water instead of the full ¾ cup.

Once the dough comes together, sprinkle some flour on your working surface. You will want to roll the dough out to a thickness of ¼ inch or less. Thicker than that and it won’t dry and cook properly. Too thin, and it will burn, brown too much, or crumble too easily. Less than 1/4 inch thickness is the ideal height. Don’t worry if it isn’t exact. Because there is no leavening agent like yeast or baking powder, it won’t rise. The thickness you cook the dough at will be about the same as the final cooked product’s thickness. I have made these a little bigger than ¼ inch, and they will still come out fine, but they are harder to eat and take longer to cook. 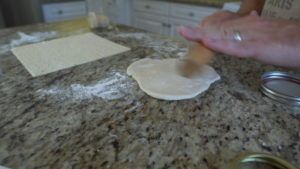 You can either use your cookie cutter or mason jar lid to cut out neat circles or use your knife to cut into the more traditional 3-inch by 3-inch squares. To make the traditional square hardtack version, trim the edges of the rolled-out dough and set it aside, so you have a square of about 9-inches by 9-inches. Cut the 9-by-9 square of dough into a tic tac toe pattern, and you will have nine squares with approximately 3-inch sides.

The excess dough you set aside can be shaped by hand or rolled out for additional biscuits. If you use the small mason jar lid, it will allow you to store the finished hardtack in the next size up Mason jar. You could skip the rolling pin altogether and just shape these by hand if you want to. 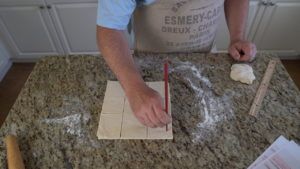 Using the chopstick, writing pen, twig, or another similarly shaped object, poke holes into each square. The holes don’t need to go all the way through the dough, but they can. This process is called “docking.” The holes will allow moisture to completely escape in the cooking and drying process.

Gently transfer the squares to your cooking sheet, cooking stone, or cooking screen. If you use a screen, you can slightly reduce the cooking time and end up with a somewhat crispier biscuit. 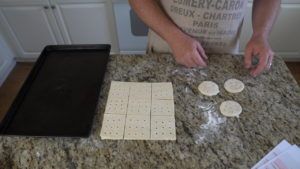 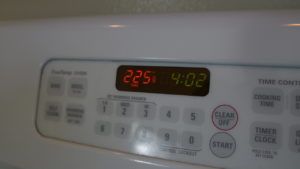 Place in an oven at 225 degrees Fahrenheit/107 degrees celsius. Bake them for 2 hours, then flip them and bake and dry them for another 2 hours. If you want to reduce the overall baking and drying time by a full one-quarter, replace ½ your water with vodka. This will evaporate faster than water, 172 degrees versus 212 degrees, and won’t leave any residual taste behind. It may also help to kill off any bacteria or wild yeast that may accidentally become a part of your mix, so this may marginally add to the longevity of your final biscuit.

After 2 hours, you will want to take them out of the oven and flip them. They may stick a little to the cookie sheet but will come up with a spatula. You don’t want to use oil on your cookie sheet because you don’t want the biscuits to pick up any of the oil in the cooking process. A silicone cooking sheet or non-stick cookie sheet would be ideal for this process.

When you take them from the oven, transfer them to a wire rack for cooling. If you are in a dry and not humid environment, you can leave them in the air a little longer to further dry out. Once 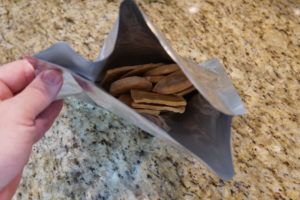 they are at room temperature, you can vacuum seal them or use mylar storage bags and oxygen absorbers to store them for maybe 100 years or more.

That’s it. It’s a straightforward means to make and store survival food. It’s light and can sustain a person for a couple of months if it was all you had to eat. The main thing is to keep them free from oxygen, moisture, or any insects like the weevil or maggots.

History, Nutrition, and How To Eat Hardtack
Molar breakers, tooth dullers, worm castles, sea bread, dog biscuits, sheet iron, ship’s biscuits, hardtack…whatever you call it, it’s maybe the ultimate survival food. As long as humankind has been baking with processed cereal grains, there’s been a version of it. If it was all you had to eat, you could survive on it alone for two to three months, and when adequately stored, it can stay intact for well over a hundred years. That makes it one of the oldest and most resilient foods you could have in your prepper supplies.

Hardtack is hard. It can break your teeth and loosen your fillings. 9 of these and some salted pork was a standard Civil War ration for a soldier. Lacking adequate storage techniques, civil war hardtack would often become infested with maggots. This lead to their nickname worm castles. In the Royal Navy, the rations were a pound of hardtack and a gallon of small beer, which was the equivalent of near beer today with an alcohol content below 2%. The biscuits are lightweight and sturdy if kept dry. They pre-date the Civil War and the Royal Navy and were probably first invented when unleavened processed grains were cooked too long and too slow to be bread.

Egyptian sailors are known to have carried a flat, hard, and dry loaf made of millet grain. The Romans had a version of their own, as well. Crusaders carried a biscuit that was typically a combination of bean flours, rye, and barley. Almost every culture around the world has some version of it using the indigenous cereal grains.

Nutritionally, there isn’t much there. There isn’t any vitamin C, which is why sailors on long voyages would sometimes get scurvy. There are about 15 carbohydrates, 2 grams of protein, 1 gram of fat, 1 gram of fiber, 290 milligrams of sodium, and scant amounts of potassium, sugar, calcium, and iron. It will keep you alive for about two months without supplementation with other food sources. 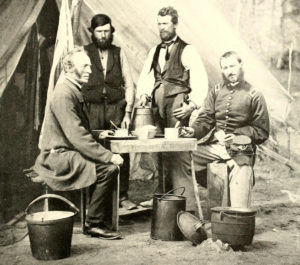 There are several ways it can be eaten. Civil War soldiers would often drop it in their coffee and let the heat and liquid soften it. They would also smash it and put the crumbles in soups of whatever they could gather. In this way, it acted as a thickener. A really common practice was to soak them for an extended time then fry them in some of the pork fat that was also part of their rations. This created a type of fry bread with a little more flavor. You can soak it in milk or milk and honey to soften it. If it’s on the fresher side and not too hard, you can eat it like a hard cracker and put jam or preserves on it. Sprinkling them with cinnamon will add a little flavor after a disaster and will help to keep insects away.

I will sometimes make a quick batch and take them on hikes or camping trips with a bit of trail mix as well. They provide a decent carbohydrate boost. If you plan to consume them in a relatively short amount of time or plan on packaging them for long-term storage, you can tamper with the recipe and experiment with other grains and flours. The Aztecs had a version of hardtack made from quinoa. You could use bean, corn, oat, barley, rye, or even almond flour. Different flours, however, may reduce the shelf life of your hardtack. The natural fats in the flour will oxidize over time, which may give the hardtack a stale and rancid smell and taste. The key is to cook out all the moisture so any natural yeasts or molds can’t take root on them and store them in an airtight, moisture-free environment. You can even put some rice grains in the container if it’s airtight and can remain pest-free. Don’t use sugar unless you plan on eating them right away, as this will attract unwanted pests and yeasts. 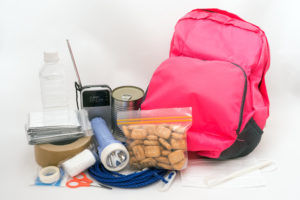 Well, there you have it. Hardtack! One of the first processed and baked survival foods. Let me know in the comments below how your batch turns out, and let everyone know your secret to making or eating hardtack. Do you have some stored away in your prepping supplies?

I’m trying to portion this out. I did similar with the 3″ squares, would it be 3 of those for a day? I tried to look it up and I found some interesting stuff, but not quite the answer I was looking for. Thanks!

I’m looking forward to trying this out asap