Home Cooking How to Make Tallow with Beef Fat 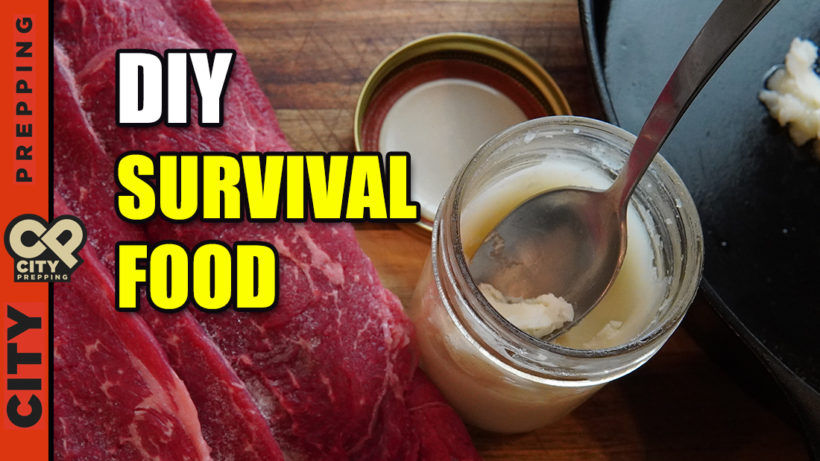 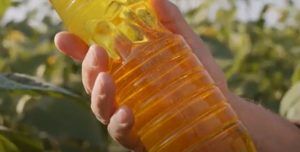 Before you could pick up a bottle of Vegetable, Sunflower, Olive oil, or even a can of Crisco or lard, people made and used Tallow. Tallow can be kept in your pantry and is naturally shelf stable for years. You can use it anywhere you would use cooking oil–from baking to frying. It has been used in cooking, for making soap, candles, as a healing salve and skin balm, as well as a lubricant for wood and leather working industries. Recent studies have shown that despite its high saturated fat and triglyceride content it may actually be an essential part of a healthy diet and is safer for you to consume than many other oils.

When you trim the fat off your ever-increasingly more expensive cut of beef, don’t throw it away. Instead, make some Tallow. Here, Shawn will show you how and give us a brief history of Tallow. Let’s see how he does it…

WHAT YOU NEED
Beef fat or other fat. A slow cooker or pot with a lid if making your tallow in the oven or on the stovetop. A means to stir your fat. A mesh strainer or cheesecloth to strain the pure tallow from the cracklins and impurities. That’s it. Now for the details…

HOW TO MAKE TALLOW
Trim the fat off your beef and store it in a zip lock bag in your freezer. When you have an entire ziplock freezer baggie full, you have enough for a batch of tallow. You can, if you have the 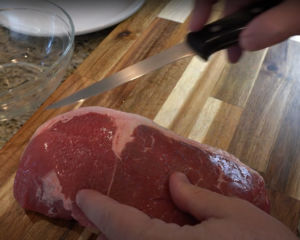 connections, get fat directly from the butcher. It is very inexpensive, and there’s a good possibility your butcher will just give you a pound or two for free if you tell him what you plan to use it for. You used to get bones for bone broth that easily, too, until bone broth became the latest and greatest super-food. Will tallow be next?

When the fat is cold, it can be cut more easily. You want to cut it into smaller pieces no larger than 1/4 inch cubes. You can use a food processor to pulse it down to this size. When it is at the right size, place it in the slow cooker on the lowest setting for six or more hours. Stir occasionally and make sure no scalding or burning is occurring. You can make this on the stovetop at the lowest setting there, but the likelihood of burning is higher. You can also make it in the oven. Fats begin to break down around 130 to 140 degrees, so you can use your oven at its lowest setting. Mine only goes down to 175 degrees Fahrenheit. You want to make sure that your fat doesn’t burn. I will use both the slow cooker and the oven for this example with equal amounts of fat so we can compare the results. After I compare the results I’ll coax out a little more on the stovetop burner.

As a general guide, one pound of beef fat will give you about six to seven ounces of rendered fat. Once you have rendered the fat down for six or more hours, occasionally stirring, run through the strainer or cheesecloth to obtain the pure liquid tallow. Refrigerate your finished product. When you want to use some, just remove it from the refrigerator and let it warm a little. I scoop it out with a large spoon and let it melt in my cast iron pan before cooking any number of things. The remaining crispy chunks of fat are called 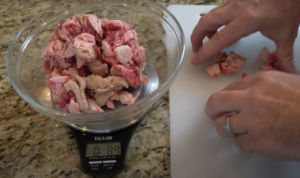 cracklings. They are suitable to feed your dog. I have eaten them on occasion. It’s probably not the healthiest thing I could eat, but they’re tasty. Think of them like a pork rind but crunchier.

I used three methods of rendering the tallow just to see how the quantities would differ. I used a slow cooker, the oven, and then the stovetop. Whichever method you use, you want to stir it at least once per hour to help work the liquid fat out. After 6 hours in the slow cooker, I had almost a half cup of tallow. That’s about what I would have expected from a half-pound of beef fat. The saucepan in the oven only yielded about a quarter cup. I combined both cracklins into the saucepan and finished it on the stovetop. The saucepan on the stovetop allowed me to coax out a little bit more. I think the best way to do this based upon my three methods is to use the slow cooker and then the saucepan on the stovetop. My total yield was about seven ounces, which is pretty good. You can do this with any fat from bison to chicken to duck and more. Yes. you could reserve your hamburger fat in this same way, and you certainly should, but I like knowing the tallow I am using for cooking is from high-quality fats. I think you can taste the difference.

WHAT’S TALLOW?
When Truman C. Everts was lost in Yellowstone in 1870, he nearly starved to death. Surviving on only the roots of a thistle plant and whatever meager substance he could find, he was nearly at 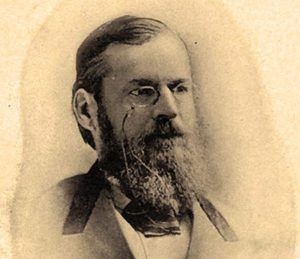 death’s door when he was found 37 days later. Even after being found, his recovery was uncertain. He writes in his harrowing account entitled 37 Days of Peril:

“The night after my arrival at the cabin, while suffering the most
excruciating agony, and thinking that I had only been saved to die
among friends, a loud knock was heard at the cabin door. An old man in
mountain costume entered–a hunter, whose life was spent among the
mountains. He was on his way to find a brother. He listened to the
story of my sufferings and tears rapidly coursed each other down his
rough, weather-beaten face. But when he was told of my present
necessity, brightening in a moment, he exclaimed:

“Why, Lord bless you, if that is all, I have the very remedy you need.
In two hours’ time, all shall be well with you.”

He left the cabin, returning in a moment with a sack filled with the
fat of a bear which he had killed a few hours before. From this, he
rendered out a pint measure of oil. I drank the whole of it. It proved
to be the needed remedy, and the next day, free from pain, with
appetite and digestion reestablished, I felt that good food and plenty
of it were only necessary for an early recovery.” 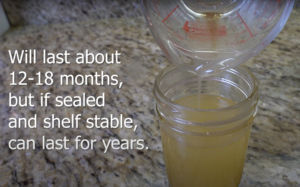 Tallow is simply fat that has been rendered down to liquid oil. It will be a solid at a cool room temperature or if kept in the refrigerator, but it will quickly become a liquid when warmed or heated. It can be used anywhere you use cooking oil or butter and will impart a little more flavor to the food. Historically, tallow came from more than just the fat. It was brains, spinal cord, thymus, tonsils, spleen, intestines, placental tissue, and so on all rendered down. Modern versions, however, are cleaner and rendered just from the fat. It is primarily made up of triglycerides that current research shows aren’t as bad for you as was once thought when consumed as part of a healthy diet. It can be used anywhere shortening is used and is the main ingredient in the Native American food pemmican, which I have another video on how to make that. Subscribe to this channel for more on that recipe. It’s a good fat for frying, baking, sauteing, and roasting. It can help give crusts, pastries, fried foods, and baked goods a delightfully crumbly texture like only a shortening can do.

If you save and re-use your bacon grease, you are using a type of tallow. Because bacon is often cured, smoked, and peppered, it will have a more flavor-forward profile than just beef fat. Today, tallow is making a comeback, and several companies sell duck, chicken, bison, lamb, even wild boar tallow. Traditionally, tallow was used for high heat frying in most fast-food restaurants because it remained very stable under high heat conditions and imparted a good flavor. The industry switched in the 1970s when the vegetable oil industry gained power and touted the benefits of polyunsaturated fats. These saturated fats are returning to favor, though, and casting off the maligning they received in the 70s. This whole, cleanly sourced, and purer fat sources like tallow are more accessible for the body to break down and utilize. Natural animal fats may be healthier than partially hydrogenated vegetable shortenings, especially those containing trans fats, which have been linked to conditions including heart disease. Tallow is an excellent source of niacin, vitamins B6, B12, K2, selenium, iron, phosphorus, potassium, and riboflavin.

As a lubricant for engines to candles to fuel to soap to leather working to moisturizing body butter, there are hundreds of uses for tallow. I almost exclusively use mine for cooking. Frying foods 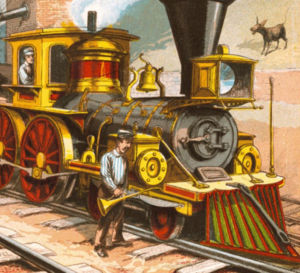 imparts a slightly different texture to the finished product. You can use it in place of butter or oil in recipes to impart a marginally earthier tone to the food. The gaminess of the fat source will determine how earthy the final product tastes.

That’s it. It’s a straightforward recipe and procedure. You pretty much just trim the fat and apply the heat. Instead of throwing out that fat or thinking it’s terrible for you, trim it, save it, and render it into tallow. Your cooking will improve in flavor, and you may even be a little healthier as a result. If you have to bug out, grab your tallow and throw it in your bugout bag. It will stay stable for a long time and will be helpful to you in a multitude of ways. If you infuse some with tea tree, lavender, clove, citronella, or cinnamon oil, and some powdered zinc oxide, you will have an incredible bug-repelling sunscreen that will stay put and moisturize your skin. That’s just one non-cooking use for this incredible base fat. Learn how to make it, and let me know in the comments below how it went and what you use it for. If you liked this video, please hit that thumbs-up video. If you’d like me to make something else in my prepping kitchen or garden, let me know in the comments below. I try to read many of the comments to bring you fresh ideas and new skills. So, make some tallow today and bring your cooking to a whole new level. Keep building your skills in the prepping kitchen…

Thanks so much for the informative video. I recently started saving bacon fat and using it to fry and scramble eggs. It can also, be used for pie crust. It is good to be reminded of the old ways.
Fats is one thing that can be hard to store. Vegetable oils have a short shelf life.
You mentioned sealing the tallow. Is it processed or just sealed with a hot lid? I am always interested in how to preserve food for long term.
Thanks again.

Stored in your refrigerator or sealed in a jar and submerged in a cool stream it could last for years. Bacteria can’t really take hold in it. I think if you pressure canned it, it would last for years and years.

How long can you store tallow, lard, chicken and duck fats?

Some of the commenters on the video claimed to be using 30-year-old Tallow. The nice thing about it is that when it goes bad it will smell rancid. You will know.

Thx for great info !! I saved bacon grease for cooking, a habit i learned from my mom growing up , i had no idea i could take it to another level ! Thx again !