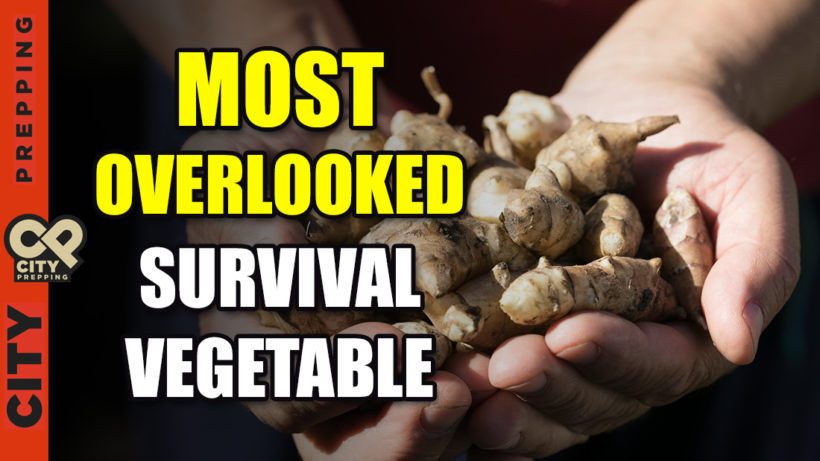 “Keep your face to the sunshine, and you cannot see the shadow.  It’s what sunflowers do.”— Helen Keller. 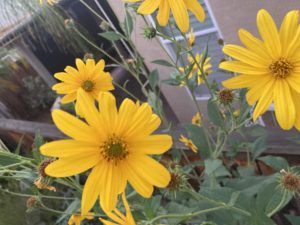 The sunflower should be the symbol of preppers and survivors, and it’s the unsung hero that every prepper should grow, know how to recognize in the wild, and use.  Helianthus comprises about 70 species of annual and perennial flowering plants in the daisy family Asteraceae. Except for three South American species, the species of Helianthus are native to North America and Central America, but they now grow around the world.

In this blog, we will take a look at Helianthus tuberosus.  Its common names are sunroot, wild sunflower, earth apple, Canadian truffle, and Jerusalem artichoke.  The tuber of this plant can commonly be found in some grocery stores, and it is sometimes referred to as a fartichoke.  The taste is similar to that of artichoke hearts, but it derives this slang name because of its high amounts of inulin.  When the tubers are stored for an extended period, this inulin will convert to its component fructose. Still, inulin is only digestible by gut bacteria, hence the gas that it sometimes causes.

I will show you how to grow, harvest, and cook the sunchoke to reduce the gassy effect.  I will also freeze-dry some and make it into pasta.  Let’s explore this ultimate of prepper plants.

The first thing to know about this plant is that it grows wild in almost any soil.  Colonists first brought it and other sunflowers back to Europe, and it now extends around the world.  Its tuber roots are prolific, and it will take over whatever garden plot you put it in to start.  One planted acre will yield almost 9 tons of tubers.  The real plus for the prepper is that you have an abundant source of 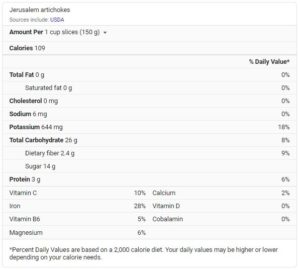 fiber, carbohydrates, 2%, and protein in an emergency situation.  99% of people might stop to pick the flower, but they would never think to eat the tuber below.  They would be missing out on some critical vitamins too.  One cup has 10% Vitamin C, 28% Iron, 5% Vitamin B6, 6% Magnesium, 2% of your recommended daily allowance of Calcium, and a whopping 644 milligrams of potassium.  It’s a survival superfood if you know how to prepare it.

Harvesting is easy.  Here I have clipped the stalk after it ran its complete seasonal cycle.  The flowers are quite nice and grow to easily six feet tall.  The birds and pollinators love them, and they give a great splash of color.  You can see the tubers of this variety are right on the surface.  I don’t have to worry about harvesting too many.  Just one in the ground will turn to dozens by next season.  I can also leave the rest in the ground, come back for them later, or grow an even larger harvest next season.  This is a plant you don’t need a green thumb for.  Keep it watered in decent soil, and it will take off.

As with any root vegetable, you want to wash the dirt off to ensure you get any harmful bacteria off.  I will be blanching these in a pot of boiling water, so I’m not that concerned.

The key to breaking down the gaseous effects of the sunchoke is to cook them along with acidic foods.  You can cook them with lemon juice, pickle them, use vinegar, or, as I will do here, cook them with tomatoes.  Doing this breaks down the inulin.  They can be eaten raw, and they have a similar texture to a potato but taste better with a slightly nutty flavor.  I do not suggest eating them raw, however, unless your gut can process the inulin. 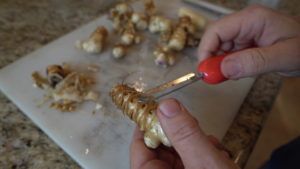 For this batch, I use a simple vegetable peeler.  This isn’t necessary, but it will give the final meal a better appearance.  It peels easily and, again, looks similar to a potato.  Once I have a bowl full, I simply slice them into quarter-inch pieces that resemble sliced water chestnuts.  To this, I will add some tomatoes from my garden.  I also add in a small sweet pepper and a few cloves of garlic.  A healthy handful of basil, flowers, and all will impart a good flavor.  Finally, I added a can of diced tomatoes.

I put this on the stovetop and let it simmer for about an hour, and cook down.  The acid works on the inulin.  It doesn’t convert it all, but it converts enough to make the sunchokes more digestible.  That’s it.  I could eat it just like this, and believe me, I did.  I could also toss it with some pasta, which I also did.  I also added some kale and some black-eyed peas to make a southern-style side dish to this batch.  The sunchokes, as I have said, taste 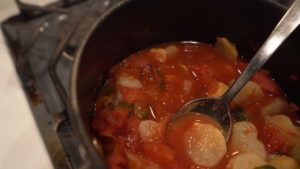 USING THEM AS A PASTA BASE

All of cooking is an experiment to me, so I wanted to process a batch into pasta.  If you haven’t made your own pasta before, you are missing out.  I don’t do it often, but the taste and mouthfeel of homemade pasta puts store-bought pasta to shame.  I could make these into noodles with my pasta maker, but I want to stay closer to what you might have in a grid-down situation, so I will process these into lasagna noodles and make a lasagna out of them.

I start by cleaning them, slicing them, and parboiling them in 1/3 cup lemon juice and water.  This will process some inulin down and assure me there are no harmful soil bacteria on them when I dry them out.  Sunchokes are gluten-free.  Because of this, I will have to make the pasta dough by also using Semolina flour and regular all-purpose flour because pasta needs gluten.  If you are gluten intolerant, you could probably use some pasta flour alternatives, but that’s a little beyond our scope here. 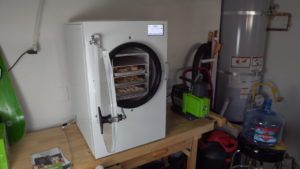 I have to do a little aside here to talk about the freeze-dryer.  I got one of these because it allows me to freeze-dry food now that I can rehydrate potentially years from now while retaining all the nutrients, textures, and taste.  Freeze-dryers have only been available to non-commercial people for a few years, and I am glad I picked one up.  I will be doing a whole series on this channel, working with this machine from unboxing to prepared meals because I think it is valuable to our community.  With recent freeze-dried food companies suspending operations because of supply-chain issues, if you can put one of these on your wishlist, you will be happy you did.  I did, as a hedge against inflation, as well.  The cost of steak in my area has doubled this year, and I can’t always justify the prices now.  I will release a later video on freeze-dried steak, chicken, even taco meat.  Subscribe to this channel for more on that, so you can see both my successes and failures freeze-drying and decide if one of these is a good choice for you.  I’ll put a link to the freeze-dryer at cityprepping.com in the links below.

You don’t need a freeze-dryer to do this.  You can use a simple dehydrator or even air dry these slices.  They may pick up a nuttier kind of taste as a result.  I put my sunchoke slices on the freeze dryer tray and set them to freeze.  Freeze-drying is a long process, but what happens is fantastic. As the food is slightly warmed in the frigid environment of the vacuum, the water in the food 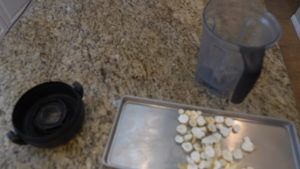 sublimates.  That’s a fancy word for the ice passing directly from a solid to a gas.  It skips the liquid phase and forms as ice on the walls of the freeze-dryer.  The result is a food that is reduced to 1-5% residual moisture.  Bacteria and yeast can’t live in that environment.  Normally, a slow freezing process causes sharp ice crystals to pierce cell walls.  This is why you can end up with mushy food.  Flash freezing the food and then freeze-drying maintains the cell walls, thereby preserving the texture and mouthfeel of your food.

Freeze-drying allows me to powder them into a fine powder and mix with an equal part of semolina flour to make my lasagna noodles.  I started with 7 ounces of sunchokes, and that was freeze-dried and powdered down to a half-cup flour.  To this, I topped up with semolina flour to make a cup, and I then added one cup of all semolina and 1 cup of all-purpose flour.  My freeze-dried sunchoke flour will rehydrate with the eggs.  To make it into pasta dough, I add three eggs,  a Tablespoon of olive oil, and a pinch of salt. 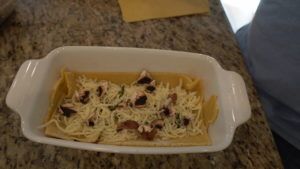 Work it together into a ball, wrap the ball in a baggie, and refrigerate for at least an hour.  Then roll it out to about 1/8 of an inch, slice into your pan shape and start layering.  To make this into lasagna, I will put a layer down in an oiled olive pan, then alternate layers with meat and sauce, mozzarella and herbs, until I run out of noodles.  The order doesn’t matter, and there are a thousand different ways to make lasagna.  I am only making this to see if there is a taste difference in the fortified noodle layer I am creating.  The meat I am using is just hamburger seasoned with some Italian herbs, onion, and garlic, and the sauce is just some jarred sauce.

This is basically a meat and cheese lasagna, though there’s no Ricotta in it.  I add just a little mushroom.  I will cook it at 350 degrees for 50 minutes covered, then crank the oven up to 400 for another 10 minutes uncovered.  Let it sit for 30 minutes before cutting and serving.  Enjoy.

While I wasn’t skeptical, I was definitely pleased with the results.  The flavors were rich and full-bodied.  The 1/2 cup extra semolina made for a slightly grainy pasta on the bottom noodle, which was more in the olive oil.  The whole family enjoyed the meal.  I think the slight extra flavor imparted by the sunchoke brought out the deeper flavors of the tomato and herbs.  I would highly recommend you try this if only to add some flavor and some extra nutrition to the usually empty carbs of pasta.

Naturally, in a grid-down situation, you probably won’t be whipping up a lasagna, but you could still dry and powder sunchokes.  Adding them to flour will stretch your supply and increase the 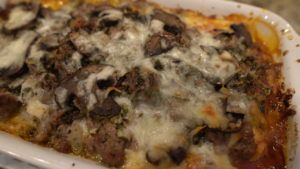 nutritional value of the food.

There you have it– two simple recipes for the root of a flower.  You could easily modify either recipe in a grid-down situation, even cooking the lasagna in a dutch oven on an open fire if you had to.  Most people only know the sunflower seed as a food source and for pressing into oil, but all of the plant species and the entire plant, leaves, roots, stalk, and flower are edible.  Plant some sunchokes today, and you will be guaranteed an abundant food source that you can draw upon for many years, while others simply admire the flowers and walk by them.  Your children’s children can harvest the tubers from the plants you plant today.  As I said, the sunflower and all its many species should be the official symbol of preppers and survivors.

What do you think?  I would love to know if you harvest sunchokes or if you have a great way to prepare them.  Let us know in the comments below.